I’m dead tired… This seems to be he trending story of my life! Today had it’s fair share of drama but I got though it thankfully without having to jump through any windows…I’m mentally gearing up to do some design work but before I do, I’d really like to share PART TWO of my weekend (told in reverse order).

This too was highly anticipated especially since it was somewhat on my ‘Bucket List’ . some time ago, I had volunteered to help paint  a mural which would be on the boundary wall of the Lalyce Grey Basic School on Cassava Piece Road in/near Constant Spring. [see that red line?] The project was undertaken by The Cecil Boswell Foundation and coordinated by Brittany Singh in collaboration with Laura Facey.

The plan was that I’d haul my lil self out of bed and catch the 7:20 bus to New Kingston. Ha … In the end I made it with about 5 minutes to spare. Sat in the car and silently willed the driver to defy time and get me to Ochi in 10 minutes … Would you believe that he almost did! I guess he was in a hurry to get somewhere as well :S Despite the risk on my life I paid him a bit extra  hehe …

I wasn’t quite sure where I was going so I called City Guide. Pity I hadn’t thought to consult Google maps or I would not have been so clueless!

painting alongside someone else. The idea behind it was simple, the kids were the ‘masterminds’ so to speak. They were allowed to express themselves on an 11 x 17 board. The team chose about 14 and we split up into groups and attempted to replicate the works of art on a larger scale. There were at least 20 persons there so by 12 the entire wall was almost complete.

For a few hours we were graced with the presence of some members of the community who were quite fascinated by the project. one passer by argued that we were messing up the wall and should leave it alone. He seemed to change his mind when we explained that it was the children’s art and we were merely doing what they would like to see. He said ‘I was just joking, it’s nice’ and hastily walked away.

Once again the rain threatened to spoil a wonderful day but lost the battle and as the sun blazed on I felt ridiculous in my two shirts and wondered why I left my cap in the bag and didn’t wear it (hence my super tanned face on Sunday!) It was fun chatting with the people who were working immediately beside me and watching the mural take shape was great! There was a section that we both couldn’t figure out how to paint. It all seemed so random and abstract. It wasn’t until later in the day that I took a look at it again and suddenly saw the outline of a man glaring at me …. It made my day and instantly deepened my appreciation for the child’s art. 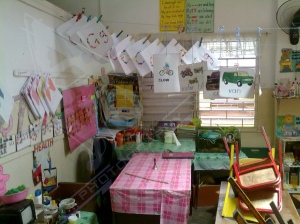 Lunch time found us seated around miniature tables. The chair was so tiny I was afraid I’d break it. Looking up took me back in time to my own basic school/kindergarten days when I’d stare at the maze of information around me. There were things dangling from the ceiling. Every square inch was covered [so I’ve exaggerated :P] with some valuable piece of information and I’m sure that if they could, they’d have found some way to get information on the floor as well. I wondered how I managed back in the day but then came the question ‘isn’t the young mind like a sponge?’ – highly absorbent. P.S. Check out Sam Sharpe and the very well made up heroes, heroine and government officials!

The new Street-scape. Sorry I didn’t do a before and after!

We also mounted some 40+ Art Work on one of the walls in what seemed to be the assembly area. Wish I could see the look on the kids’ faces when they get to school and see their new surroundings for the first time! 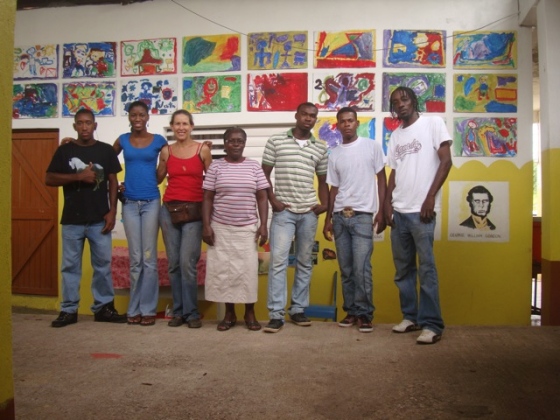 (L-R) ‘Allah’, ME, Laura Facey-Cooper, The school’s Principal, Kemar, Norris Jr. and Jeffrey. All smiles (well most of us) though feeling pretty exhausted after a day well spent! By this time everyone else had left.